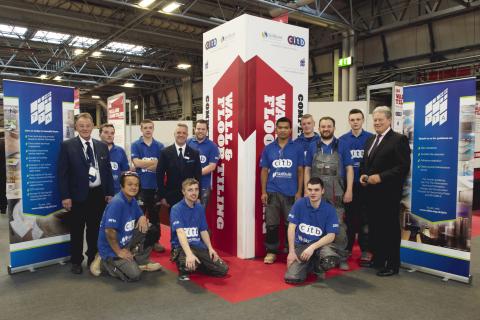 A trainee tiler from Northern Ireland scooped the wall and floor tiling gold medal at the Skills Show at Birmingham’s NEC.

The gold medal went to Kieran Magee from Southern Regional College in Northern Ireland; silver went to Jack Radford from Nottingham’s New College and Lee Jones from Cardiff and Vale College picked up the bronze medal.

Kieran Magee and Jack Radford were also named in Squad UK to train towards selection for WorldSkills Abu Dhabi in 2017. They join Armondos Tamulis from Southern Regional College in the squad.

The Tile Association is the lead competition supplier for the wall and floor tiling competition and provided the prizes for the gold, silver and bronze medal winners. As well as a cheque, medal winners will also receive a Bellotta Pro 55 Tile Cutter. BAL provided adhesives for the competition, with tiles supplied by Johnson Tiles and trims by Schluter. Suretile, meanwhile, supplied a Tiletracker system for each finalist.

The wall and floor tiling competition was one of 58 trade finals held at The Skills Show this year. Regional heats took place at colleges across the UK under the watchful eye of Dave Rowley from BAL, chairman of the Tile Association’s supply chain training committee. Finalists then moved on to the national event at The Skills Show.

Pictured above are the 2015 Skills Show finalists with, from left, John Chambers from CITB, Dave Rowley and TTA board member Bob Howard.

Congratulations to all the young tilers who were invited to take part in the final:

You can read more in the latest issue of Tilezine, the TTA’s fortnightly e-newsletter for the wall and floor tiling industry.